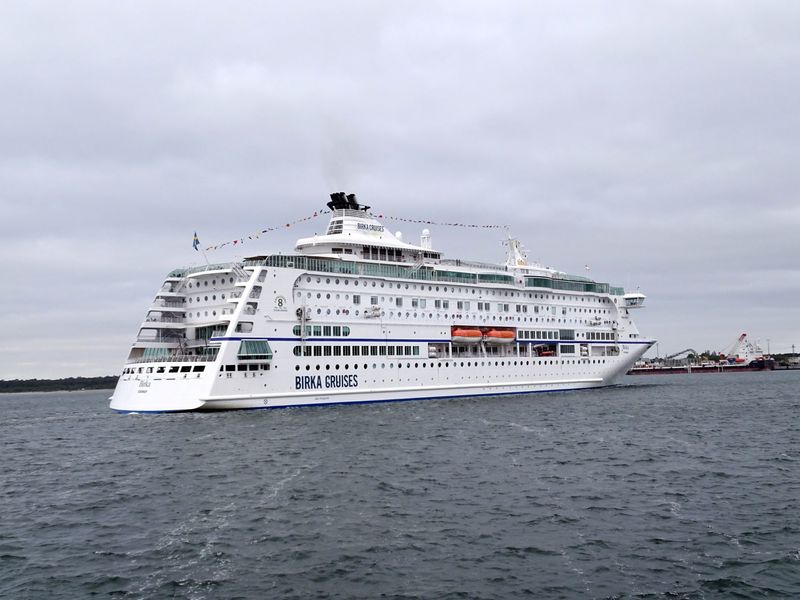 Sassnitz-Mukran, July 9, 2018 - Last Saturday, Germany's largest island welcomed the Swedish cruise ship "Birka Stockholm" for the first time. More than 1400 passengers explored the most beautiful corners of Ruegen, as well as the Hanseatic City of Stralsund.
On the occasion of the successful first call, Birka Cruises Group CEO Björn Blomqvist and captain Niklas Gustafsson invited for a summer lunch and subsequent tour of the crusader's board.
Among the invited guests were Mayor of the city of Sassnitz Frank Kracht, the City President Norbert Thomas and the managing director of Mukran Port Harm Sievers as well as other representatives of the port industry. 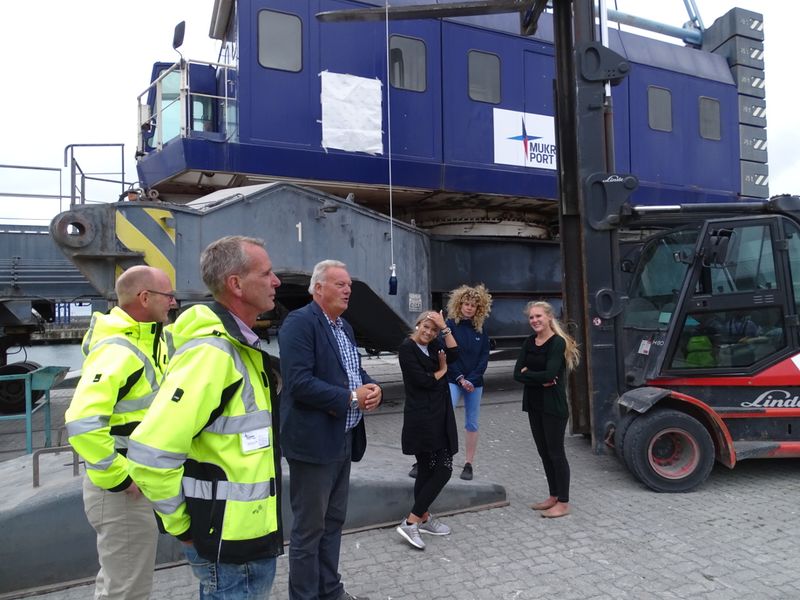 Final christening of the harbor colossus in Mukran Port

Sassnitz-Mukran, July 6, 2018 - The mobile harbor crane of the port service provider "Mukran Port Terminals" (MPT), which can handle up to 104 tonnes, was christened by managing directors Harm Sievers and Morten Lund and operational manager Christian Knappe in the presence of the entire MPT staff members yesterday.
Due to the former banana loading in South America, the crane built in 1999 was christened "Conchita".
Currently, the mobile harbor crane is used for the handling of iron ore. 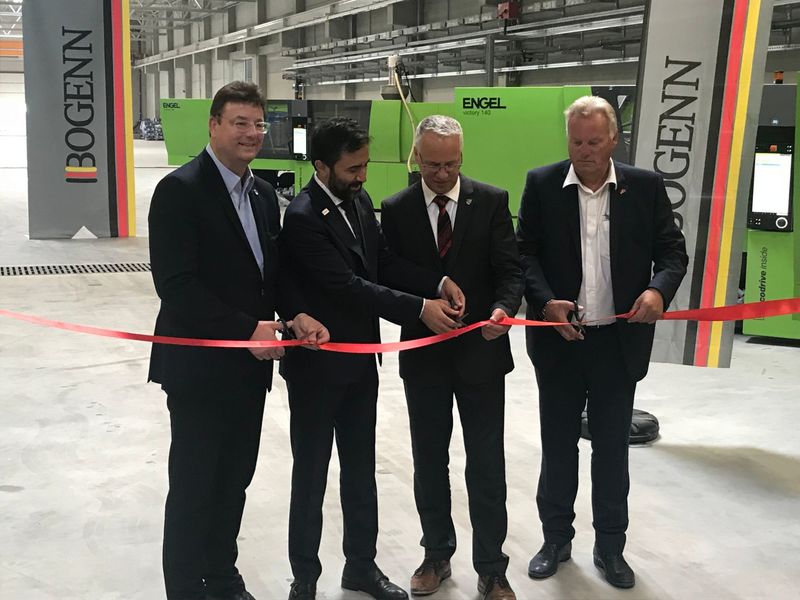 Sassnitz-Mukran, July 4, 2018 - Deutsche Bogenn GmbH invited to a festive information event at their production facility last week. In addition to the participating construction companies such as ESTRA and EAB, there were also other guests from the world of business and politics such as State Secretary Dr. Stefan Rudolph, company founder Ibrahim Mirmahmutoğullari, Mayor of the city of Sassnitz Frank Kracht and the managing director of Fährhafen Sassnitz GmbH  Harm Sievers.
The founder of the company as well as employees of Deutsche Bogenn GmbH presented the machine park which serves for pipe production and manufacture of fittings. The newly formed company Deutsche Bogenn GmbH offers further industrial diversity at the site Sassnitz/Mukran. 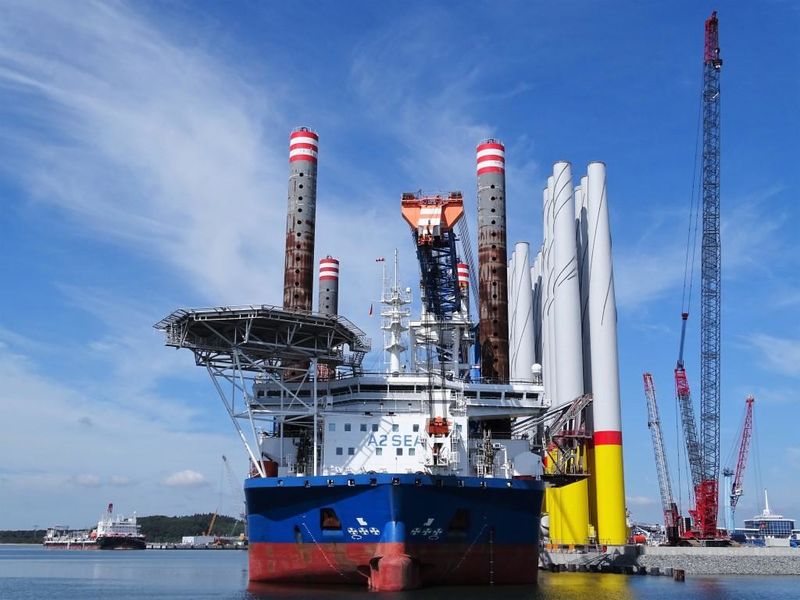 Sassnitz-Mukran, June 29, 2018 - The 133.25m long and 39.00m wide installation vessel "Sea Challenger" of the shipping company A2Sea called the Mukran Port for the first time by order of the company E.ON. In total, the vessel will call the port 15 times to take over 60 wind turbins of the 6.0 MW  class and construct them at the wind farm „Arkona Becken Südost“ . The installation ship jacked-up at Offshore Terminal North in the area of berth 10 for takeover of wind turbines. The "Sea Challenger" will take over the pre-assembled towers, gondolas and rotor blades with a heavy-duty crane. 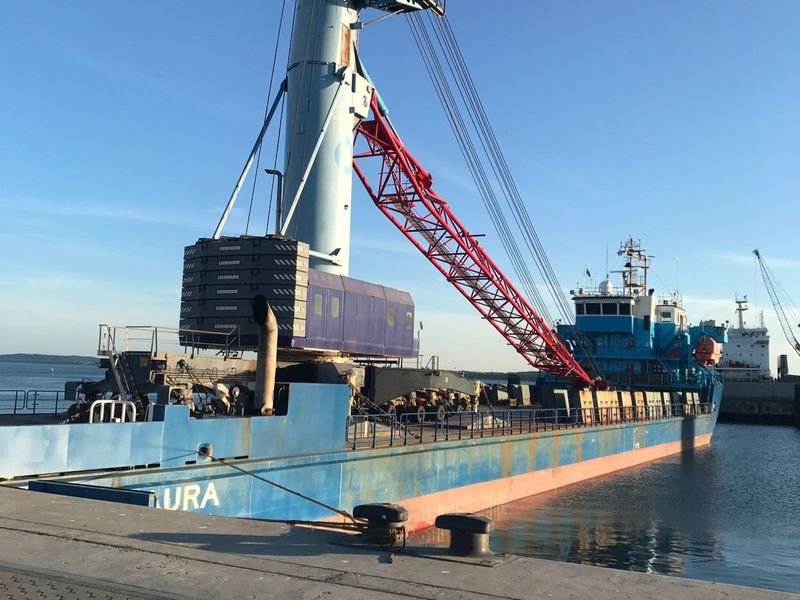 Sassnitz-Mukran, May 28, 2018 - As soon as it reached Mukran Port, it was in the middle of action - the description refers to LHM 400 Litronic. Shortly after the mobile harbor crane had rolled independently from the ship coming out of Stade, it was already lifting containers from a ship to the terminal. With a capacity of 104 tonnes, the crane is ideal for such and even heavier jobs. In the future, it will be used for Mukran Port Terminals, especially at Berths 8 and 9, but also at Berth 10. The port has deliberately chosen a flexible model that can be used for both hook and grab operations.  The last option enables handling of bulk cargo such as gravel. With a total height of 49.8 meters and a weight of 390 tons, the crane will shape the image of the port in the future. 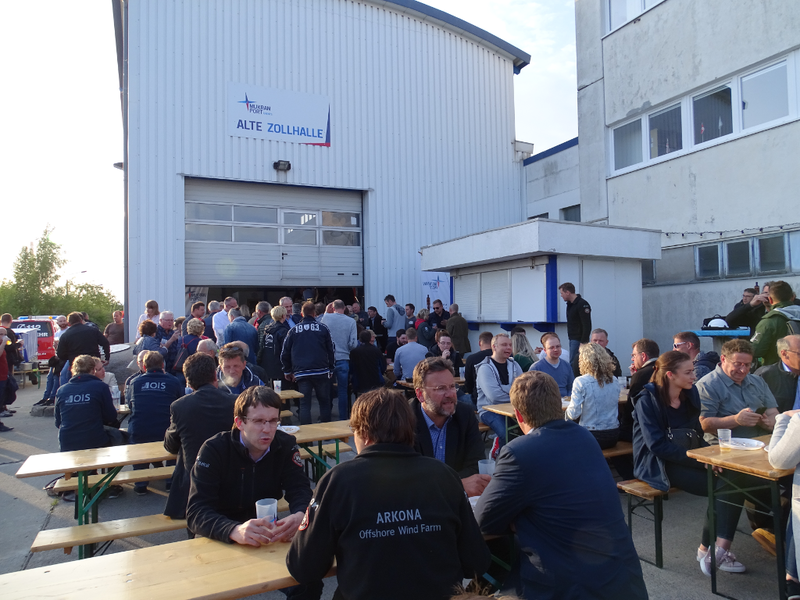 Extensive participation in the networking event in Mukran Port

Sassnitz-Mukran, May 15, 2018 - More than 100 guests attended the annual "Offshore BBQ" in Mukran Port in mid-May. The focus of the networking event was on wind farms which have already been realized or are currently under the construction in port, in which many of the visitors of the evening have been actively involved.
Also this year, as part of the event, the companies were awarded for the "Best Practice Offshore Wind 2018". The award in shape of a brass bell was presented to the turbine manufacturer Adwen, the cable producer Nexans and Fred. Olsen, operator of installation vessels.
Entertained by music provided, among others, by singer Rollo who surprised with his song “In the middle of the Wind” about electricity generation at sea, the participants enjoyed BBQ buffet and cool drinks during the discussions about the latest industry-specific developments. 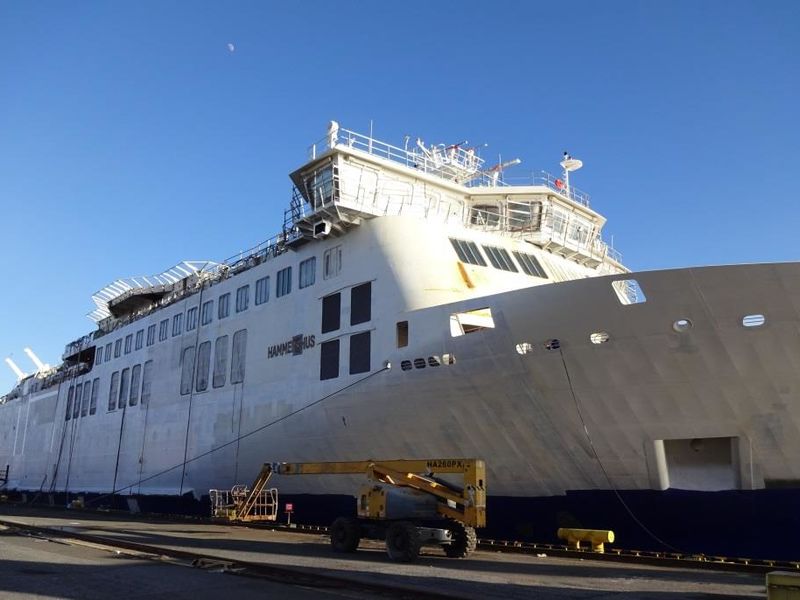 Sassnitz-Mukran, May 3, 2018 - The Danish shipping company Molslinjen will operate the ferry service Mukran – Rønne starting from September 2018. The company presented its plans for the popular route between Germany and Denmark during the 6th Rail & Shipping Summit in Mukran Port. Due to the second ferry, there will be an extended timetable with year-round crossing. Perspectively, the passenger volume is to be doubled on the route. The construction of the new cargo and passenger ferry which has been specially commissioned for the route with capacity of 720 passengers is proceeding according to plan. 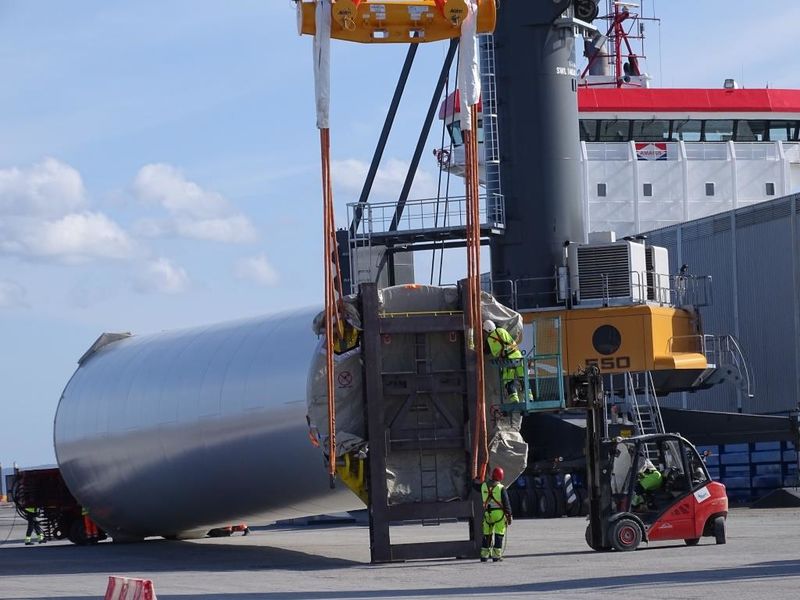 Sassnitz-Mukran, April 18, 2017 - After the first 36 of 180 wings over 70 meters in length were successfully transshipped for the Arkona-Becken Südost offshore wind farm, the new heavyweights arrived at the Mukran Port. The port service provider Mukran Port Terminals (MPT) handled the first 6 tower segments (each about 130 tons) in a tandem lift at the Offshore Terminal North. 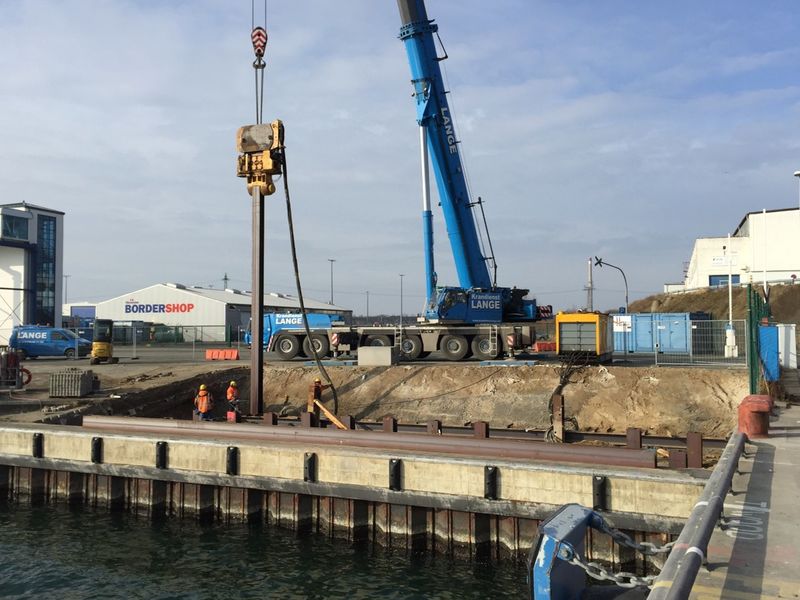 Sassnitz-Mukran, February 22, 2017 - Offshore logistics = heavy load logistics. An efficient port infrastructure is required for the increasing wind turbines (WT) with their components, which include, among others, transition pieces, rotor blades or tower segments. For this reason, two berths are being upgraded with new heavy load slabs in Mukran Port for their use in the construction of the wind farm „Arkona-Becken Südost“. The project financed by E.ON and planned by KMT Port from Hamburg will be realized by Colcrete - von Essen for Fährhafen Sassnitz GmbH. The conversion of a previous RoRo ramp for berth 7a, which has already been started, as well as timely construction start of such an area at berth 10 will soon enable to handle the WT with dimensions beyond 7 MW at the Mukran Port. 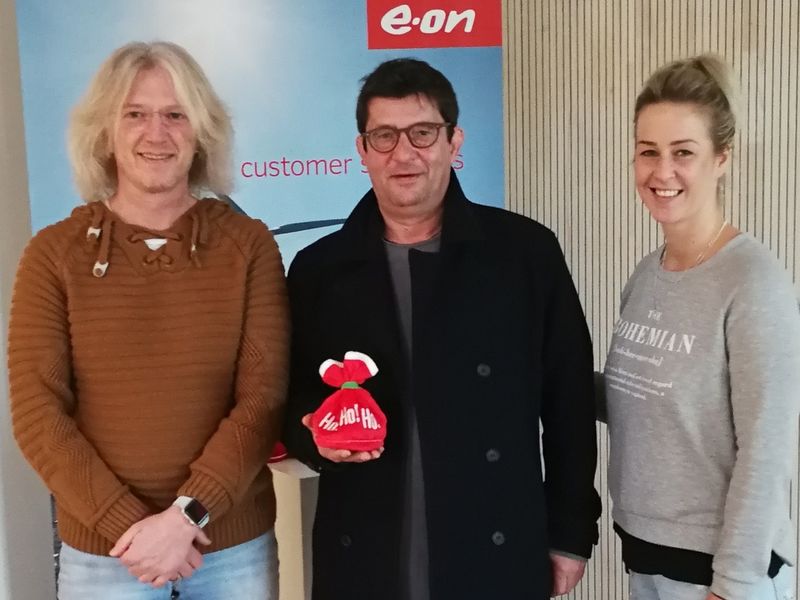 Aekona Team donates for the Seamen’s Mission at Mukran Port

Sassnitz-Mukran, December 22, 2017 - Christmas is a time of mercy. The employees of Arkona construction team who will build up the wind park off the coast of Rügen via Mukran Port in the coming months acted also in this spirit. 175 euros were donated at the Christmas party for the Seamen's Mission founded 2016 at the port location. This money will help to foster the sacrificial work of the mission on the feast days. 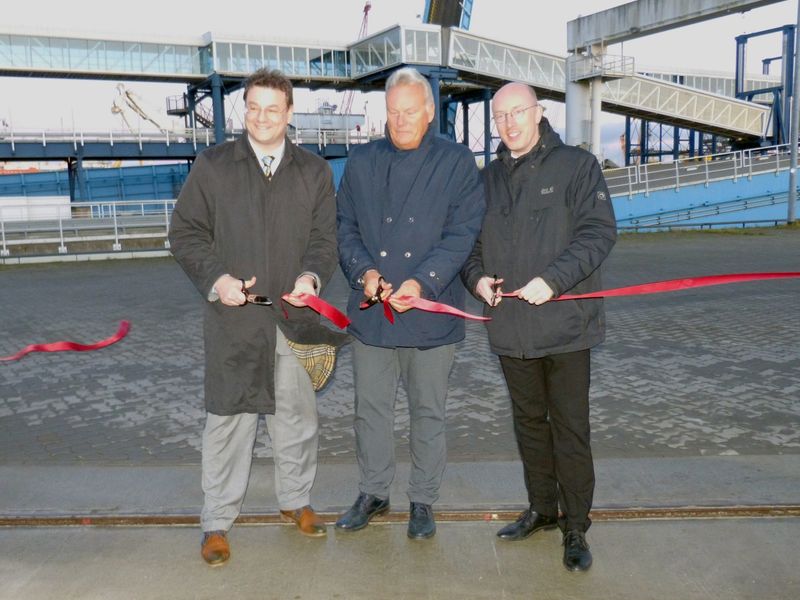 Sassnitz-Mukran, December 5, 2017 - on 4 December 2017, Minister for Infrastructure Christian Pegel handed over a grant of nearly one million euros at the official release of track 66. Due to the track extension to the quay, it will be possible in the future to handle goods from train to vessel and vice versa without further reloading. Due to this infrastructure expansion, Mukran Port consolidates its position as one of the most important universal ports in the Baltic Sea region. 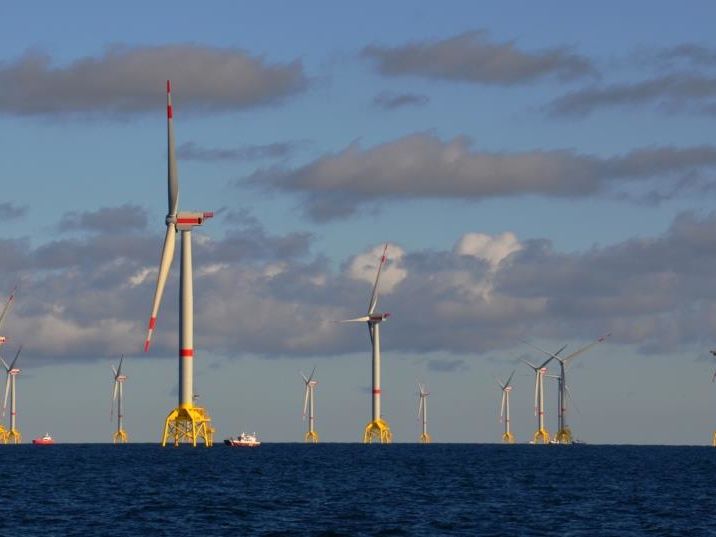 Sassnitz-Mukran, November 1, 2017 - All 70 wind turbines in the offshore wind farm "Wikinger" of the energy supplier Iberdrola, which were installed from the Mukran Port, are ready for operation on the high seas. After the commissioning, which has still to be realized, "Wikinger" can cover up to 20 percent of the energy demand of Mecklenburg-Western Pomerania with clean electricity. The operation and maintenance of the wind farm will be controlled from the Iberdrola operating building in Mukran Port for the next 25 years. 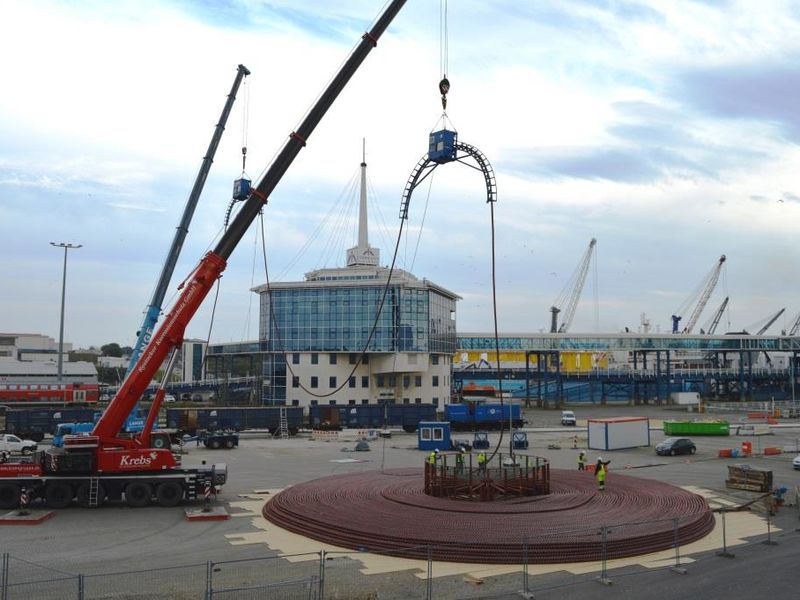 Sassnitz-Mukran, October 2, 2017 - A total of 76 kilometers of cable are on the way to the Mukran Port for a current offshore wind farm project. Between 9.4 and 23 kilometers long cables weighing between 510 and 580 tonnes will reach the port in five trains from the end of September to December 2017. Via the new track 66, the cables will be shunted by the port railway Baltic Port Rail Mukran (BPRM) to the quay and stored there before being later transshipped by the lay barge. 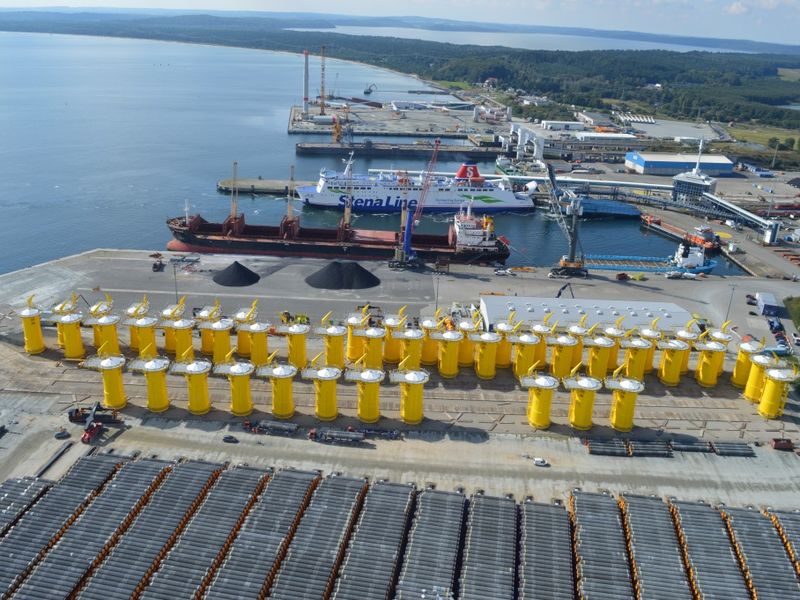 Sassnitz-Mukran, September 27, 2017 - The installation of the last wind turbines in the "Wikinger" offshore wind farm of Iberdrola is close to being completed, as the construction of a new project is already starting at the Mukran Port. The energy supplier E.ON intends to realize the "Arkona" wind farm until 2019 in front of Rügen with its 60 turbines of the six megawatt class. The 1.2 billion euro project, the official start of which took place in Mukran Port, will provide an electrical output of 385 megawatts. The required wind turbines, some of which have already been stored in the port area since the summer, will be shipped to the construction site via quays of Mukran Port. 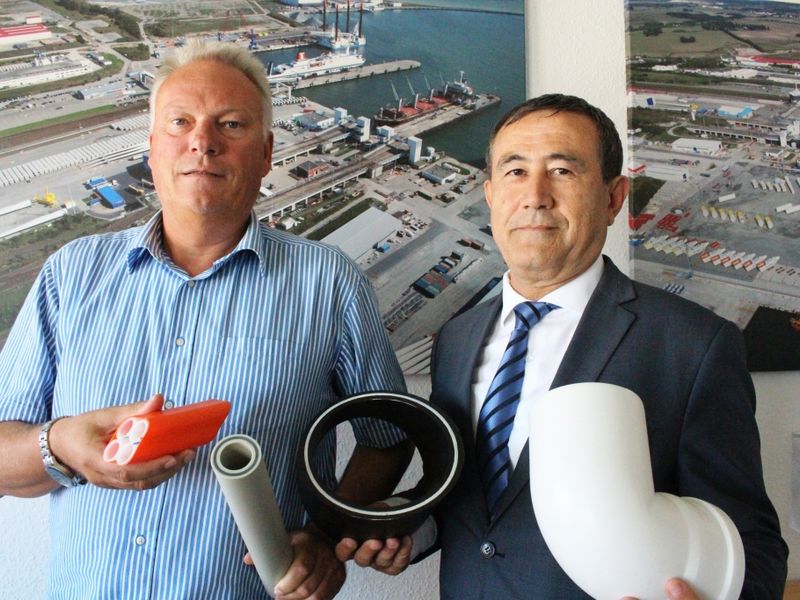 Pipe production in test phase in 2017

Sassnitz-Mukran, September 05, 2017 - Deutsche Bogenn, manufacturer of high-quality plastic pipes, will start the test phase for pipe production at its plant in Mukran Port by the end of the year. The company, located in the industrial area Südstraße in 2016, is currently installing its machine park. After a successful test phase, Deutsche Bogenn will produce series of pipes for its customers including infrastructure projects from 2018 onwards. 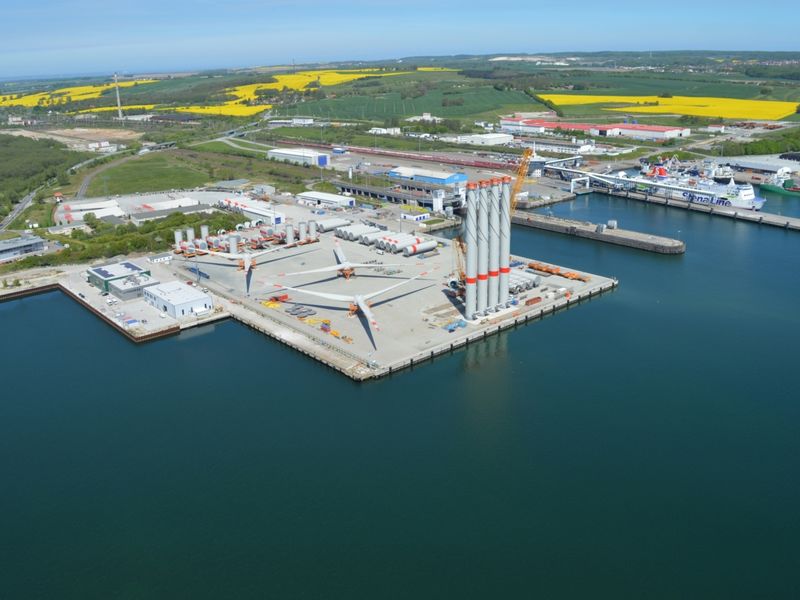 Sassnitz-Mukran, August 29, 2017 - The representatives of Mukran Port received the delegation of a large Chinese commercial enterprise at the end of last week. The main aim of the two-day visit was the unique infrastructure of the port and industrial location as well as future opportunities for cooperation. A Memorandum of Understanding was signed during the meeting, which will form the basis for cooperation in logistics of the "New Silk Road" and, if applicable, in large industrial projects and port development. 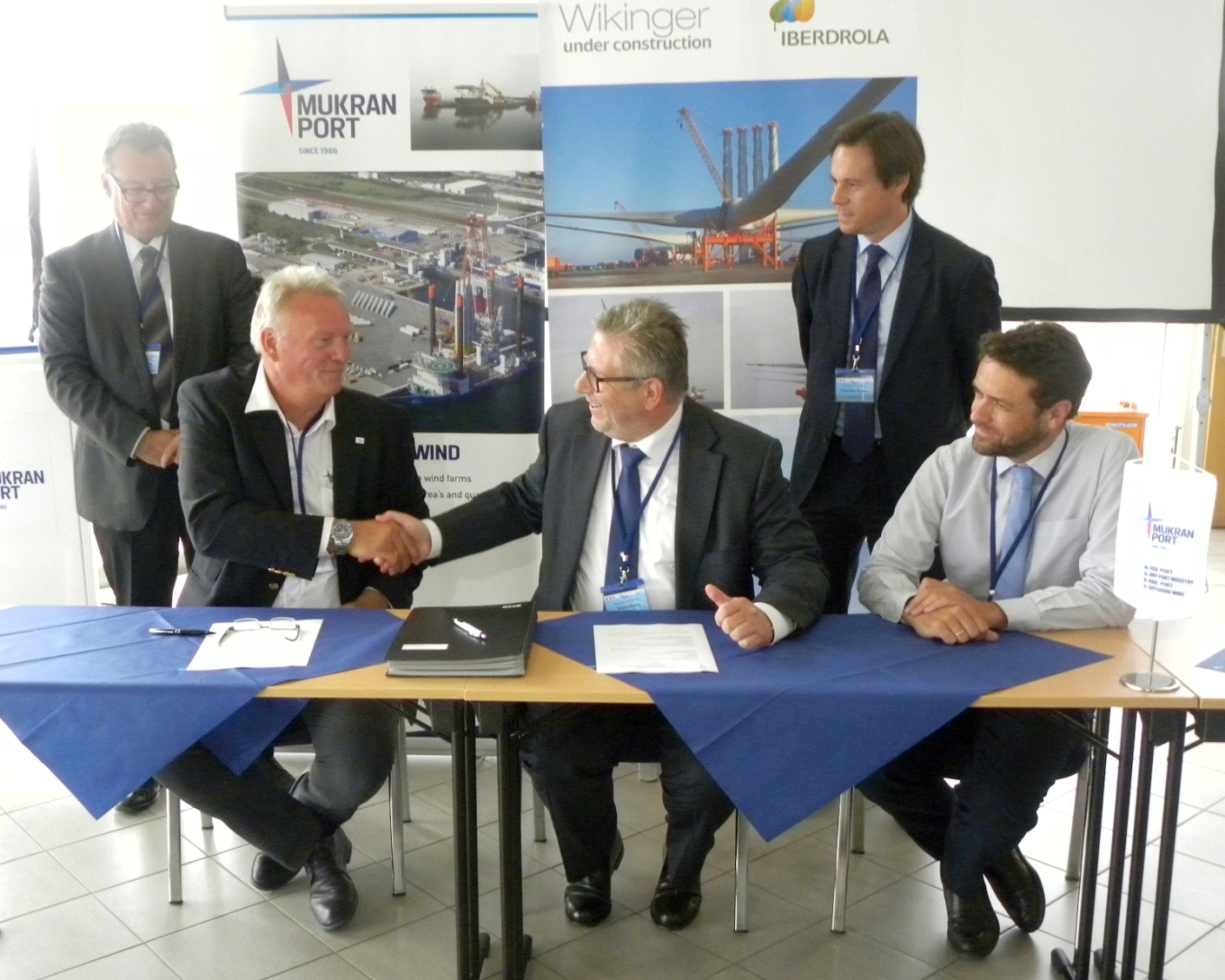 Sassnitz-Mukran, August 22, 2017 - The Mukran Port is one of the most important sites for the offshore industry in the Baltic Sea. This was the unanimous opinion at the 5th Offshore Summit, which brought together some 100 high-ranking representatives of the energy sector, politics as well as associations at the passenger terminal of the port. In the context of the Offshore Summit, Mukran Port signed a contract with the Spanish energy group Iberdrola for the long-term use of the port for the operation of its wind farm „Wikinger“("Viking"). Following the conference, by now traditional exhibition on the subject of "Fascination Offshore Wind" was opened. Companies within the industry presented their projects and answered the questions of the numerous visitors. The guided tours on land and water enjoyed great popularity, among others the operating buildings of Iberdrola and E.ON could be visited.

Sassnitz-Mukran, August 14, 2017 - Once again, a cruise ship has been moored in Mukran Port. On it’s journey from Kiel, the “Astor” stopped on Germany's largest and most popular holiday island. In addition to the attractions on Rügen such as the famous chalk cliffs, the 462 passengers also have made an excursion to the nearby hanseatic city of Stralsund. 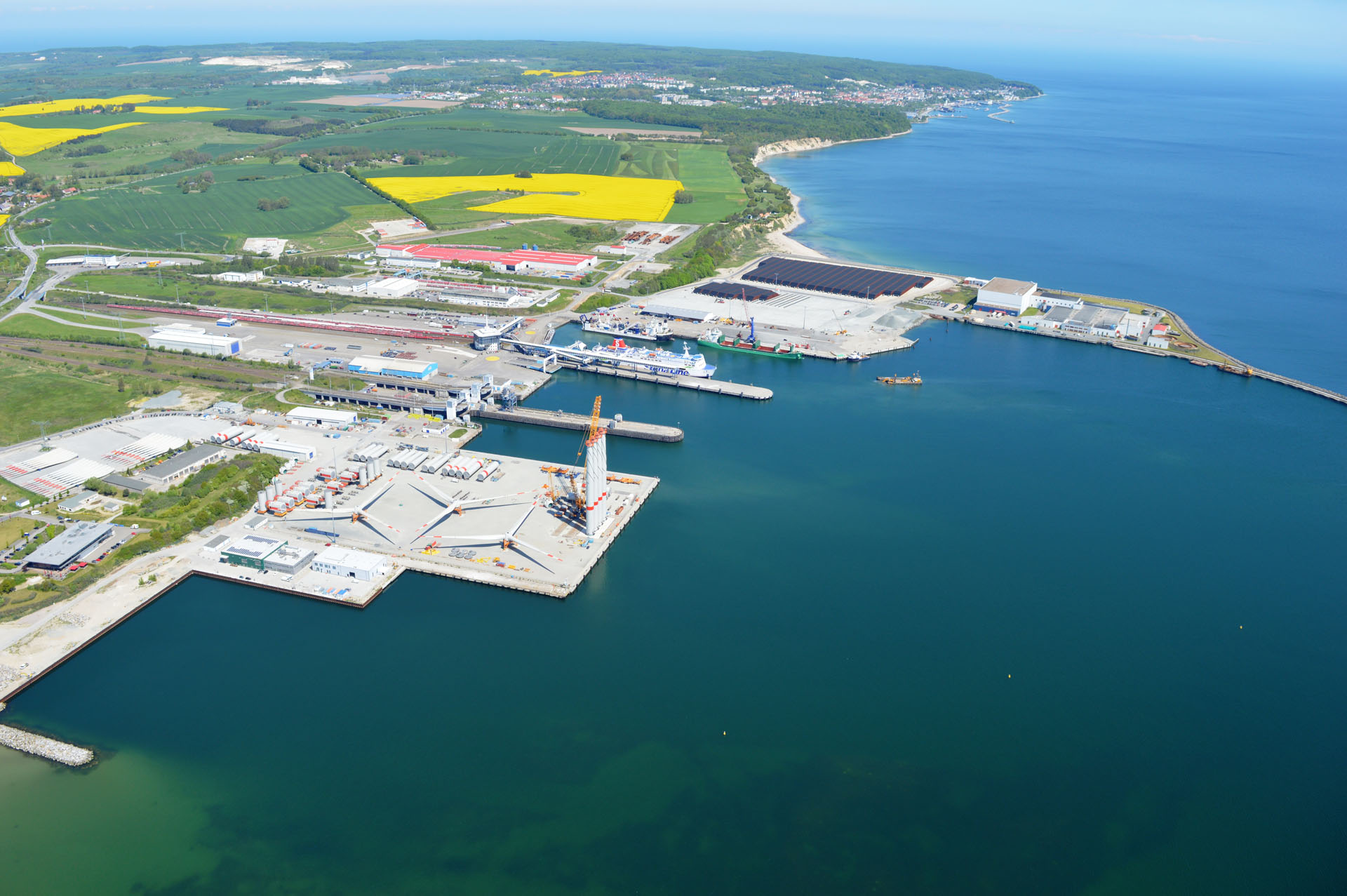 Sassnitz-Mukran, August 9, 2017 - At the end of calendar week 33, Mukran Port will focus on the generation of wind power from the open seas. A large number of companies will present their offshore involvement to an interested public on the 4th floor of the passenger terminal in Mukran Port on 18 and 19 August. In addition to the exhibition about wind power, plant tours, port trips with a ship as well as children’s entertainment round off the colorful program on these two days.

Sassnitz-Mukran, August 7, 2017 - For more than two decades, the Mukran Port has been training young people for their professional career.  In 2017 also, five young trainees started their apprenticeship in Germany’s easternmost deep-water port. Four newcomers will be trained as office management assistance and one will start his apprenticeship as a future port logistics specialist. For this training occupation, the company offers another place in this year, which the Mukran Port would like to occupy with a motivated school leaver from the region.